When St. Paul was at Ephesus his proclamation of the gospel caused such a stir that the idol makers, who were losing money, protested until "the... Continue Reading

The Bible and Us

Ever since my youth there have been four Scripture passages that I have associated together in my mind. They were first pointed out to me by one of... Continue Reading

While looking for a house, my wife and I became instant friends with the realtor. We all enjoyed our time together and met regularly. We even gave her... Continue Reading

The Relationship Between the Kingdom and the Body

The Oracles of God

Here at BBS, our friends often give us ideas and suggestions for new literature via  phone calls, letters, and emails. Last year, I spoke on the phone with Brother John Lynch in Idaho, and we had a great conversation around the Word of God, rightly divided. During the course of the call, John recommended that BBS produce a timeline chart of Paul’s ministry and the Book of Acts. He felt it would be helpful for people to have a visual depiction of when the important events took place in Acts, the dates and locations of Paul’s travels, and when and where Paul’s letters were written. I thought John had a tremendous idea.

When I began the study and research into this project, I soon realized that this wasn’t as easy as it sounded! There are many differing opinions as to the order in which Paul’s letters were written and the timing of the various events in Acts. When you put something in print, however, it’s like putting a stake in the ground and announcing, “This is where I stand!” I realized that I needed to come to conclusions with the Spirit’s help based on my personal study of the Word. After repeatedly reading Acts, “comparing spiritual things with spiritual” (1 Cor. 2:13), and consulting learned men who are skillful in the Word, I came to the finished product that you see below. 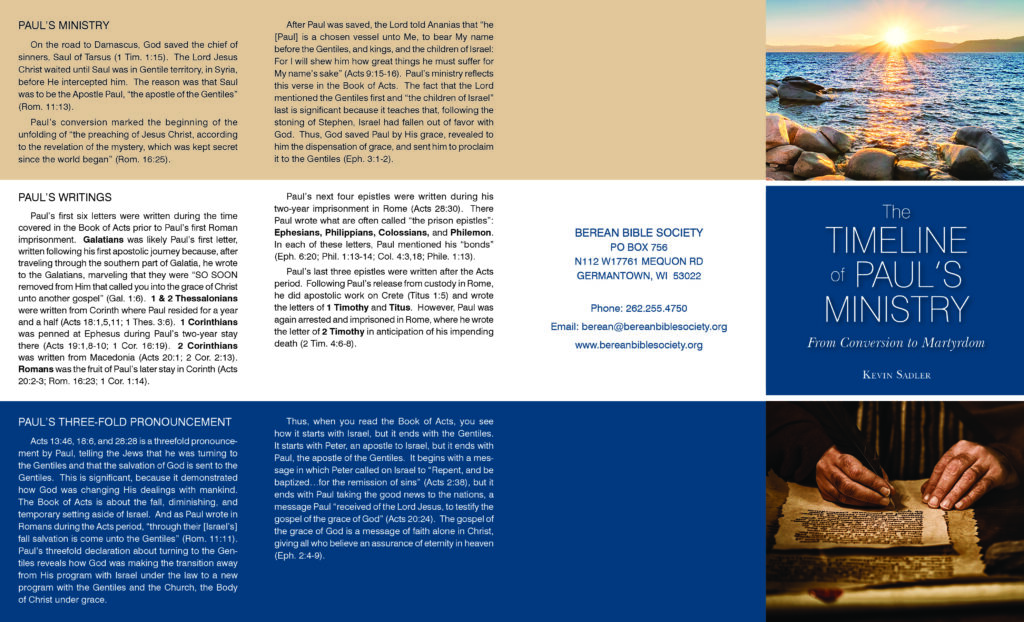 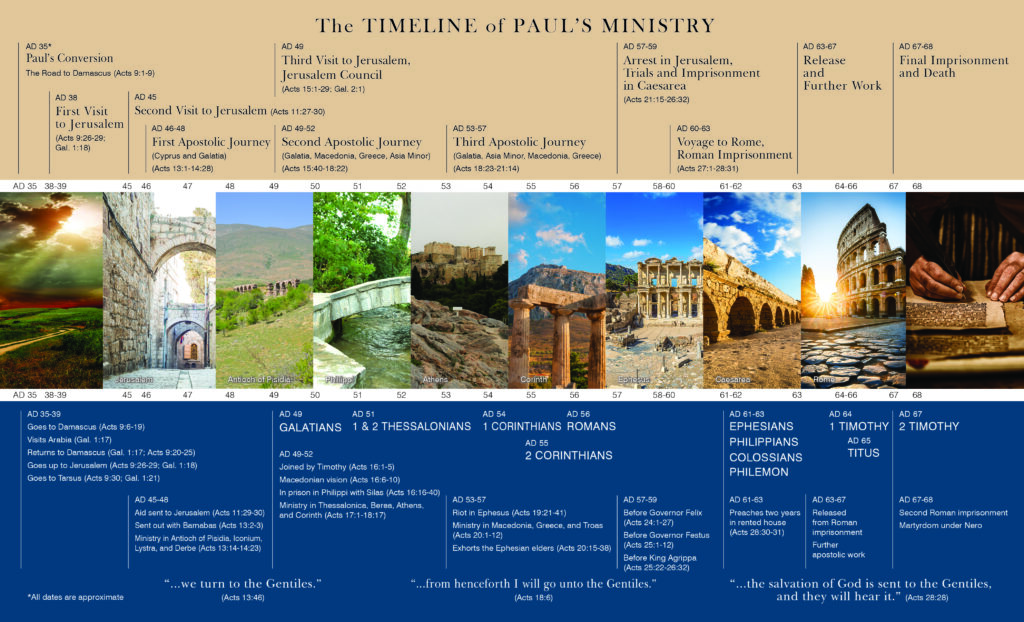 You will notice on the bottom left hand corner the notation that “*All dates are approximate.” I am not dogmatic about the dates, but I do believe these dates to be accurate within a range of 1 to 3 years. The main purpose of the dates is to show the chronological order and flow of the events in Paul’s life. And it can be helpful to see approximately when the various events of Paul’s ministry took place and how far apart one event is from another.

As you look at the chart, you will notice that there are 11 years between Paul’s conversion (Acts 9:1-9) and when he and Barnabas were separated out by the Holy Spirit for the first apostolic journey (Acts 13:2-3). That 11-year period is one-third of Paul’s ministry!

Prior to the first apostolic journey, Paul carried out an extensive ministry among the Gentiles during those years as he preached Christ in Damascus in Syria, Tarsus in Cilicia, and other places in the regions of Syria and Cilicia (Gal. 1:21).

Personally, I don’t believe Paul spent three years in Arabia receiving the revelation of the mystery from the risen, exalted Lord (Eph. 3:1-3). We are not told by Paul in Scripture how long he spent in Arabia. Paul simply wrote, “I went into Arabia, and returned again unto Damascus. Then after three years I went up to Jerusalem…” (Gal. 1:17-18). The majority of those three years were spent by Paul ministering in Damascus.

Like Moses received the law from the Lord over a period of 40 days and 40 nights (Ex. 34:27-28), and like the twelve apostles were taught by the Lord following His resurrection for 40 days “of the things pertaining to the kingdom of God” (Acts 1:3), it’s possible that, likewise, Paul received the revelation of grace from the Lord over this same time period in Arabia.

The order of Paul’s letters is often debated, but I believe Galatians is the first epistle Paul penned. Paul addressed this letter “unto the churches of Galatia” (Gal. 1:2). He does not identify these churches, but we know they were churches where Paul had personally ministered. Galatians 4:13-14 describes how Paul preached the gospel of grace unto them “through infirmity of the flesh” and how they received him “as an angel of God, even as Christ Jesus.”

The Book of Acts only mentions four Galatian cities that Paul visited: Antioch of Pisidia, Iconium, Lystra, and Derbe (Acts 13:14-14:23). Churches in each of these cities were established by Paul during his first apostolic journey (Acts 14:21-23). All these cities were in southern Galatia.

Paul visited Galatia in all three of his apostolic journeys. However, none of the locations or churches in the rest of the province are identified when Paul traveled in the north and “throughout…the region of Galatia” (Acts 16:6) during his second apostolic journey, nor when he “went over all the country of Galatia…strengthening all the disciples” (Acts 18:23) during his third apostolic journey. For these reasons, I believe Paul wrote to the churches named in Acts in southern Galatia after his first apostolic journey: Antioch of Pisidia, Iconium, Lystra, and Derbe. After returning from this journey, Paul marveled that they were “SO SOON” removed from Him that called you into the grace of Christ unto another gospel” (Gal. 1:6). All this makes Galatians the first letter written by Paul.

“Then fourteen years after I went up again to Jerusalem with Barnabas, and took Titus with me also”
(Gal. 2:1).

One item I heavily debated in the making of this chart is the 14 years mentioned by Paul in Galatians 2:1. In a lot of ways, this provides the timing for Paul’s ministry. I believe Paul was basing these 14 years from a single point: his conversion. The overall point of Paul’s timeline of events in Galatians 1:15-2:1 is to show that he did not receive his gospel “of man, neither was I taught it” (Gal. 1:12), and that after he was saved, “immediately I conferred not with flesh and blood: Neither went I up to Jerusalem to them which were apostles before me” (Gal. 1:16-17).

Paul’s point wasn’t to describe how long it was between trips to Jerusalem, but to show the separation he had from the Twelve as he received revelations from the Lord since his conversion. For 14 years, Paul had little to no contact with the Twelve in Jerusalem, which Paul wrote to prove that they did not teach him his gospel, but that instead he received it “by the revelation of Jesus Christ” (Gal. 1:12).

If one adds up the years covered in this passage, the total shouldn’t include only Galatians 1:18, “after three years I went up to Jerusalem to see Peter,” and then skip ahead to the 14 years of Galatians 2:1. To be consistent, the time frame should also include the “Afterwards I came into the regions of Syria and Cilicia” (Gal. 1:21), where he spent approximately 6 years. Then comes Galatians 2:1: “Then fourteen years after I went up again to Jerusalem.” Stacking and adding all the years together, it equals around 23 years.

If we place these years in the timeline of Paul’s ministry and have his third visit to Jerusalem in approximately AD 58, it becomes impossible to fit everything in. Therefore, my conclusion regarding Galatians 2:1 is that the 3 years and 6 years are included within the 14 years and the 14 years was the amount of time since his conversion on the Damascus Road, “when it pleased God…and [He] called me by His grace, To reveal His Son in me, that I might preach Him among the heathen…” (Gal. 1:15-16).

As you can see in the “AD 63-67 Release and Further Work” section of the chart, I believe Paul was released from his first Roman imprisonment. We can believe this for a few reasons.

First, Paul wrote Titus, “For this cause left I thee in Crete, that thou shouldest set in order the things that are wanting, and ordain elders in every city, as I had appointed thee” (Titus 1:5). Other than briefly stopping by Crete in a ship on his way to Rome as a prisoner (Acts 27:7-9), there is no other time Paul visited Crete. But Paul told Titus that he left him there to ordain elders in the churches in every city where they had been established. These churches could have only been established after Paul was released from his first Roman imprisonment.

Second, during his second Roman imprisonment, Paul asked of Timothy, “The cloke that I left at Troas with Carpus, when thou comest, bring with thee…” (2 Tim. 4:13). Paul had been to Troas many years earlier (Acts 16:8,11; 20:5-12), but this message to Timothy suggests that the apostle had lately visited Troas on the coast of Asia Minor and had left his cloak there. This only could have happened if Paul had been set at liberty to do so.

Third, Paul further informed Timothy, “Erastus abode at Corinth: but Trophimus have I left at Miletum sick” (2 Tim. 4:20). Trophimus, unfortunately, had become too sick to travel on with Paul for the continuing apostolic work Paul did after his release from his first Roman imprisonment.

As with everything we publish at Berean Bible Society, we ask that you don’t take our word for anything, but that you consider this information in the manner of the Bereans of old, “in that they received the Word with all readiness of mind, and searched the Scriptures daily, whether those things were so” (Acts 17:11).

“The Timeline of Paul’s Ministry, Conversion to Martyrdom” is available for purchase in our store.